Another part of the #28daysofwriting Staffrm challenge.

I’m sure we all have plenty of things we wish we had known when we are younger. And how much of the time do we then try and force (not always helpfully) that information on the students in our care? “You’ll regret this…. when you’re older”, or “when I was your age….”, or “I wish someone had said this to me when I was your age….”, etc. After all, what is the perk of getting older if it means we can’t pass on such wisdom as ‘don’t run with pointy objects’ to the next generation?! 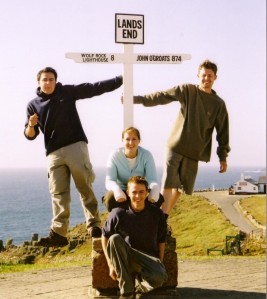 The first image was from a family climbing trip when I ‘earned’ my first climbing boots, and the second image from a friends’ teenage trip to Cornwall. Such innocent times. All that mattered was being outdoors, friends and family, pets, and food. So maybe things haven’t changed that much… 😉

So, what would I have told myself in my youth?

1) Relax. I went to an all girls’ grammar school. I was fortunate and had teachers I (mostly) liked but we were always under pressure to achieve and exceed. It was frowned upon to say that your ambition was to have a family, and you were schooled from day one to be career minded and ambitious. I didn’t really want that, I wanted simple things. We weren’t encouraged to spend time learning useful things like cooking as it was considered ‘sooooo anti-feminist’. You were seen as failing if you dropped a mark at any point, and guilt tripped for letting the team down. I didn’t learn to relax, and didn’t feel I had time to do other pursuits.

2) Learn a musical instrument. I always fancied the clarinet but we couldn’t really afford it and I wasn’t disciplined enough to teach myself. I did learn to play the piano, ish, but struggled with reading music as left it too late really. It’s a shame as I love music, and love singing, and my whole family are so musical.

4) Maintain a foreign language. I loved learning French and Spanish, but they fade so quick. Why is it that random Latin verbs still stick in my head but useful phrases in languages that still exist do not?!

5) Grow a thicker skin sooner. Risks are fun and exciting. You don’t have to laugh and pretend it’s all ok, admitting weaknesses is not itself a sign of weakness. People who admit they need help aren’t necessarily helpless.

One thing I do know. My teenage self would have laughed hysterically to find I’m a teacher. Who’s laughing now eh?! 😉

"I am still learning" (Michelangelo)

Geographer, teacher, learner, family girl, dog lover.
"I am not afraid of storms, for I am learning how to sail my ship" L.M.Alcott)